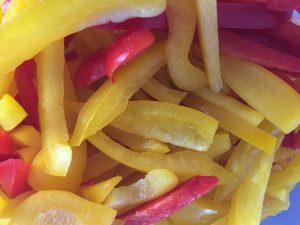 maker where I went through all areas of the grocery store to help people make healthy choices for themselves and their family. https://www.youtube.com/watch?v=cgEbpNL9PSg&t=1s

In the 40 minutes of video, the opening scene stresses the importance of cooking your own meals at home and knowing what to buy in order to do that.

This year I had the pleasure of attending a Diabetes Canada meeting in Sydney, N.S. It was a great morning of networking and meeting colleagues from all over Cape Breton. I asked one of the attendees at that meeting, Ann Marion Willis, a Registered Dietician who works with Atlantic Superstore if she was able to help out with an idea I had to do a cooking class for a small group.   Out of that conversation I requested a location at the home economics room at Baddeck Academy with four stations to do a cooking class. They were gracious enough to allow us to use their facilities.

The plan is to have a parent or two bring their children in (from grade primary to grade 12) and show them how easy it is to make a meal that is healthy for them. Ann Marion has healthy recipes with nutrition information for all, a starter smoothie, a meal and dessert. She also demonstrated the preparation of the food. Space is tight but hopefully demand will drive further classes.

Studies that try to tie food intake with outcomes are notoriously plagued by problems that measure food consumption with questionnaires based on personal recall of consumption. Nevertheless there are studies that show the effect of how your food is prepared and what affect it has on your health. A 2007 study of 84 undergraduate students in Greece found that diet becomes less optimal when the student leaves home to live away, including eating out. Specifically, fresh fruits and vegetables and oily fish consumption dropped once they moved away from home.

The time taken to cook and cleanup after a meal has decreased by 50% in the last 40 years. While this number on its own isn’t very significant in determining anything, but it does reflect the availability of commercially prepared food, which is both quicker to prepare and cheaper because of its mass production. It stands to reason that both of these factors can lead to increased food consumption.  In fact, countries that spend more time in food preparation correlate with a lower obesity rate. Again, there is no causality claimed here though.

In another study in the Journal of the American Dietetic Association (2006) that utilized food intake questionnaires in just under 1000 young adults, it was discovered that young adults that prepared food less claimed time restraints as a major determining factor. However in those that did report frequent food preparation did claim that they ate out much less often and were more likely to meet dietary objectives for healthy eating.

Learning to cook meals at home not just for yourself but your loved ones is one of the single most important things you can do to live a healthy life, when combined with physical activity. Teaching yourself and your children to prepare healthy meals at home controls much of what you consume and much of your overall health.